Titles: UNDAUNTED & THE DARKEST OF LIGHT 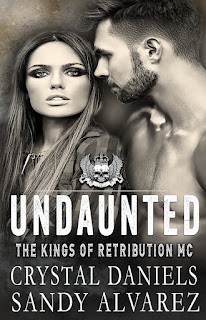 As the VP of Kings of Retribution MC, I live and breathe club life. After suffering the loss of two women in my life, I grew cold and indifferent to the idea of love. I don't need to let anyone in. I've seen the aftermath it can leave in its quake.


The last thing I'm looking for is someone to fill the void.

Struggling to keep my head above water, my only concern is taking care of my sister. The last thing I expected was to fall in love with a tattooed biker, Logan Kane. With evil hiding in the shadows, I have no idea the danger my sister and I are about to face.

Will they overcome their demons in the end, or will they lose each other in the process? Lies will be told, secrets will be revealed, and what was once lost... will be found. 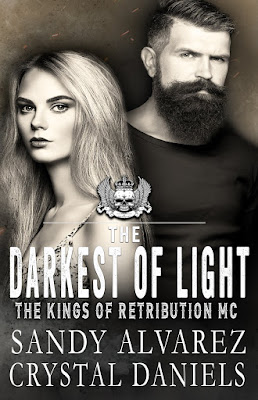 As a young boy, Gabriel Martinez had his family-his entire life ripped away from him.

Revenge and indignation becomes his means of survival. Several years later, a series of events lead him to his new family, The Kings of Retribution MC, where he meets Alba Jameson.

Heartbreak being the final push, Alba chooses the life her sister worked so hard to give her by going off to college.

While trying to bury her feelings for Gabriel, she finds herself faced with the unexpected. Finding strength and courage she starts to pave her own path in life, until a faceless threat sends her home.

Crystal and Sandy are Romance Authors and the sister writing duo behind several Love, and Purpose filled romances. Since 2017 they have published seven books including The Kings of Retribution MC Series - Undaunted, The Darkest of Light, Finding Solace, Defy, Unbreakable and Lost King. And a standalone Novella - Leather and Mistletoe, an MC Christmas.