Sebastian and Ailin are everything 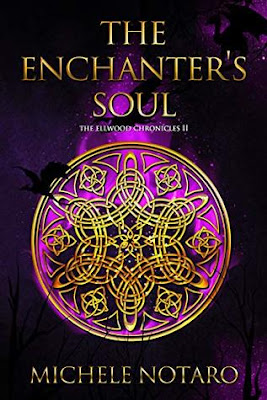 Many fall as the last enchanter rises…

The first line of the ancient prophecy keeps playing over and over in my head, but I’m afraid to remember the rest. I don’t want to think about what’s coming for us—what’s coming for him. I’ve been keeping Brinnswick safe for years; I’ve been keeping my coven safe my whole life; and now I was responsible for keeping Sebastian safe, too. It shouldn’t have been a problem, he was my vitmea viramore, after all, and I was used to having the weight of the world on my shoulders.

What Seb doesn’t know is that everyone in the magical community is after him—even if they don’t realize it yet. They’ve been looking for him for centuries; not only for him, but for his soul. But they never counted on him having me. I will protect him with my every breath and take down anyone that gets in our way. His soul belongs with me, not in the arms of evil.

The Enchanter’s Soul is the second book in The Ellwood Chronicles and is a continuation of Sebastian and Ailin’s story. It contains explicit material and is intended for mature adults 18 years of age and older.

I've been looking forward to this book since I first read The Enchanter's Flame. Michele Notaro has become one of my top favorite authors. She's a brilliant writer with quite the evil streak.

This book picks up just days after the first one and it spans over the course of a few months. I loved that.

Where book one was told from entirely Sebastian's POV this one is mainly from Ailin's POV with some Sebastian chapters thrown in. I do not like single POV. There are two sides to every story and I like seeing those sides. But I love the format of this series. I love being in Ailin's head because there was so much we didn't know about him and about the supernatural world in book one so it's good to see the world through his eyes.

Sebastian breaks my heart. I feel so much for him. I hope he can get a better handle on his magic and himself because he deserves to live a fulfilling life. He's spent so much time alone that it kills me. He's so lovable and broken. I just want to hug him sometimes.

Michele Notaro is totally evil and completely broke my heart. There was *spoiler thing* that took me by surprise and I cried.

I cried so much. My poor heart. I knew something was going to happen because I could feel it, but I didn't expect something so dramatic after what had previously happened to them so bravo to the author on the feels because there are a lot of them. I want to cry again just thinking about it.

The prophecy part of it is brilliant. I love how it was woven and how it's slowly unfolding. The way the prophecy reads I knew that whatever was brewing in this book was just the beginning. A lot of creatures came out of the woodwork. You could feel the tension, but it wasn't until it happened that you were able to put your finger on it. That was brilliant writing.

I love how they built their relationship over the whole book. How they dealt with Seb's magic. How they work together, how the coven loves Seb. The build-up was subtle, but I loved it. My heart was in my throat for the big reveal. I had tears in my eyes and when it was all over. I felt all the love between them and the need. These two together just work, even through all their struggles. They needed to fight for each other because they both have strong personalities that could and does drive the other crazy.

Sebastian and Ailin are two of my absolute favorite couples and now I have to wait for Michele to write the third book. Ahh, it's going to be a long wait. I will definitely be rereading this book, and that isn't something I'm able to do often. But this book deserves it.

"You act like I'm the one that needs protection, like you have to protect me from everything. But that's not how this should work. If you protect me, I protect you just the same."

"First of all, you're more than enough, more than I ever thought fate would give me. Second of all, this is real. What I feel for you is real. We have a connection, but more than that, I care about you as a person."

"You're all that matters, I don't care about the rest."