This story is lovely 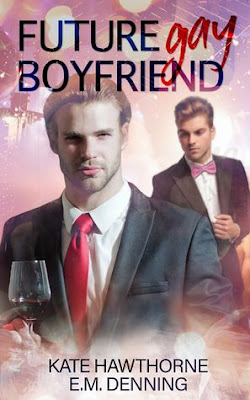 Ryan Kingston is having a terrible year. His twin brother and his best friend just got engaged, leaving him feeling adrift and out of place. Prepared to ring in the New Year drunk and without a date at the annual Mallory Vineyard party, Ryan is blindsided by desire when he shares an unexpected kiss with the last person he expected…another man.

With his darkest years hopefully behind him, Darian Fulton is finally ready to step out of the shadows and embrace his true self. Armed with pink lip gloss and a snazzy silk tie, he is determined to keep his New Year’s resolution and find his own slice of happiness; one that shows up in the form of Ryan Kingston, an alluring and apparently not-so-straight-after-all man.

Darian sets his sights on making Ryan his future gay boyfriend after a simple kiss, which quickly turns into two, then three, then more. Ryan and Darian find themselves more involved with each other than they’d ever planned. But Darian worries that Ryan is going to change his mind about being with a man—and after a surprising job offer, Ryan is worried about losing Darian for the temptations of a big city career.

Between impromptu shopping trips, midnight ice cream runs, and a long list of firsts, Ryan and Darian are faced with the choice of conquering their fears together or missing out on all of their dreams.

I was so happy to go back to Mallory Vineyard and watch Ryan fall in love. E.M. Denning and Kate Hawthrone wrote New Year's shorts that featured Ryan and Darian and they were so good and I needed a full book of them. I am so glad we got to see where these two went after they met at the New Year's Eve party.

Ryan has never been with a guy, but when he meets Darian he's enthralled by him. I can't tell you how happy I am that Ryan doesn't spend too much time figuring out his sexuality. I hate the term GFY and I hate when a character goes back and forth on what they feel. Ryan just lets himself get swept into the emotions that Darian brings out of him.

Darian, sweet lovable Darian. He's finally taking the plunge and living the life he wants to live. He's dressing how he wants, wearing makeup, and just feeling good about himself. When he meets Ryan he finally finds someone who sees him in all his beautiful glory.

This book is just lovely. It's about two people who are trying to figure themselves out and find each other through it all. These two characters weren't expecting their spontaneous New Year's Eve kiss to jumpstart a relationship, but they manage to stumble their way through it. Ryan and Darian just work, even when they don't know what they're doing--maybe because they don't know what they're doing.

I did get a little pissed at Ryan because he's a bit of an idiot, but I'm kind of pleased with the way it went. They loved each other but they weren't sure where they were going in life. Both Ryan and Darian had decisions to make, and even though some of Ryan's made me tear up, in the end, it opened their eyes to what they really wanted, which was each other.

I don't often read books that are on the sweeter side, but these two authors could convince me to read anything. I love the little break from the hot and dirty books. I love all the feelings these characters have and how they allow one another to just be. E.M. Denning and Kate Hawthrone are magic together, I can't wait to see what their next collaboration is going to be.

"He found a happiness with Ryan that he'd not expected to find."

"It felt like the moment was truly theirs; like there'd never be another night like this one, with a cock that was too eager, a mouth that was too greedy, and a hand that was too awkward, but perfect. Everything was perfect."

"He wasn't ever going to rule out the opportunity to be with someone just because of their parts. He'd just always assumed he was straight, but maybe it was because he'd never paid attention."

"Just like on New Year's, Darian felt as though he could be himself around Ryan."