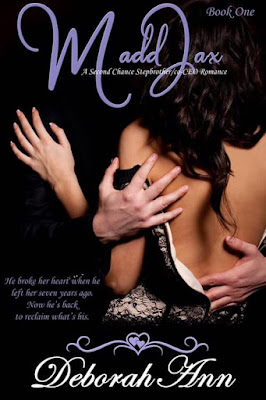 He broke her heart when he left her seven years ago. Now he’s back to reclaim what’s his…

It’s been seven years since Jaxon Jaimison left town, stole my heart, my friendship and my virginity, and took it with him. Along with our secrets.
Now he’s just waltzed back into my life, swaggering toward me with his cocky attitude.

And damn if he doesn’t look good. Smoldering eyes, sexy smile, and rock hard body made for climbing.

He’s the one man that sets my insides on fire just by being in the room; just by living and breathing.

The one man I can’t have.

The boy who owns all my firsts.

Now here he is, ambushing me with a grand entrance into our class reunion and introducing himself to everyone as my loving boyfriend, after not so much as a word all these years.

Says I always have been…

I’m not so sure about that. Because if that were true, he wouldn’t have left me, just days after taking my virginity…

I knew Maddison Cole was mine the moment I met her. Didn’t matter that we were only fifteen. When you know, you know.

But then my father turned around and made her my stepsister.

I understand Maddison’s worries, but I’ll never leave her again. And unlike my stepsister, I’m not hung up on the forbidden, taboo nature of a relationship between us, nor do I care what others think. We’re older now, more established, both successful. I’m not taking no for an answer. After all, I packed up my broken heart seven years ago and left town for a reason, determined on making something of myself, to be the man Maddison deserves.

Maddison thinks it’s just one night, she’ll give in and then I’ll disappear again, but seducing her to my hotel suite reunion night is just the start.

I’m staying, moving back into the bedroom beside hers, and the office beside hers, as co-CEO of the family business, right alongside Maddison, the current CEO…

Jaxon nearly destroyed me last time. I can’t afford for history to repeat itself. Not with the future of our family and the company at risk. I’ll guard my heart and our secrets at all costs… 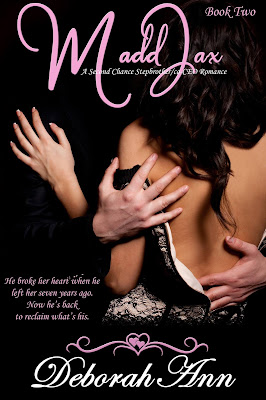 Can first love get a second chance?

But then he came back to fix what was lost and broke. All smoldering eyes, sexy smile, and rock hard body. I tried to fight it. Really, I did. But I never had a chance. Jaxon’s mere presence sets my insides on fire, his scent and his taste put my mind in a haze. The temptation’s too strong, too close.

My body craves his touch, longs to be against his. Just as I begin to feel hope for our future, let my walls down and accept what is—that Jaxon owns my heart, my body, and my soul—it all starts to unravel, when everything I hold dear is rocked by tragedy and threatened to be lost. All things come to an end, and this might be ours…

The years apart have done nothing to diminish the passion between us, the ever-present pull and need. But wooing my stepsister into crossing the line into the forbidden and giving us a second chance, earning back her trust and her heart after I left and shattered them both, has been a bigger challenge than I expected. Now that I finally have her in my arms, my bed, I’m never letting her go. Of course, there’s bound to be a few bumps on the path to Happily Ever After. Secrets rarely stay hushed. But I never saw what was coming.

Never saw our pasts coming back to tear us apart. Never saw Maddison pushing me away. And never saw having to literally fight for our future together. Loosing Maddison isn’t an option, and I’ll fight to hold onto her with everything I am. Even, if it kills me…

After years of reading with her children and passing on a love for books, Deborah was inspired to write ‘The Destiny Series’. What started out in the beginning, as a celebration of a loving, young, innocent friendship and the affecting separation after a move, spun into a mythical journey of the loving binds of friendship, deep family ties, and an intoxicating fairy tale romance, with the power of love that knows no bounds.
‘Memory Betrayal’& ‘The Deal Series’ followed, with a leap from young adult romance to adult contemporary romance. Deborah writes stories about strong, sassy, smart, confident women and loveable, good-looking, sexy alpha men, in a range of heat levels, from sweet to steamy, who always find their happily ever after.
Deborah Ann resides in Northern California with her husband and their college-age daughter and son. And while it can be a balancing act at times, with how busy family life can get, Deborah sneaks in as much time as she can to slip into the lives of her characters, and the magical world in which they live...