Cover Reveal; One Percent Of You

Title: One Percent of You 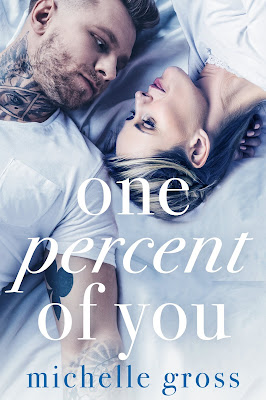 Make no mistakes about it. I know what I look like to others. Young, government-aided, pregnant mom. They see Lucy on my hip, and they see a mistake. I mean, why else would someone have a child so young, right?

They couldn’t be more wrong. I’m too busy most days between parenting, work, and finishing up my last year of nursing school to let their judging gaze tear me down until he moves in the vacant house next to the apartments I live in.


His cold, blunt observation of us doesn’t differ from any other stranger. He doesn’t know me, but he’s already painting a picture of who he thinks I am in his mind. He judges my very round belly, Lucy’s inability to leave him alone, the bags under my eyes, and the fact that I can care less what I look like anymore.

He’s a rude guy. Stays that way for months too. Then something happens, I’m not even sure what. Judgmental Guy decides Lucy and me—as well as baby Eli, are worth his friendship.

Turns out, Judgmental Guy isn’t too mean—okay, he kind of still is. But he graduates to Elijah. I build an unlikely friendship with him which deems it necessary for him to start smiling around me and my kids.

I’m wrong again. Elijah isn’t rude. He’s terrifying. His strange acts of kindness are unraveling me. Elijah is only my friend.

Michelle is from a small town in Eastern Kentucky where opossums try to blend in with the cats on the porch and bears are likely to chase your pets—this is very true, it happened with her sister’s dog. Despite the extra needed protection for your pets, she loves the mountains she calls home. She has a man and twin girls who are the light of her life and the reason she’s slightly crazy.
As a kid, she was that cousin, that friend, that sister and daughter, the talker who could spin a tale and make-believe into any little thing so it was no surprise when she found love in reading, and figured all these characters inside her head needed an outlet. They wanted to be heard, so she wrote.
The voices keep growing faster than she gets the time to write.
The stories are never going to end. That’s perfectly okay, though. We never want to stop an adventure.
She writes and loves many different genres so sign up to her mailing list to keep updated on her releases!