Book Talk Review; What He Fears

EM Denning just gets better and better with each book 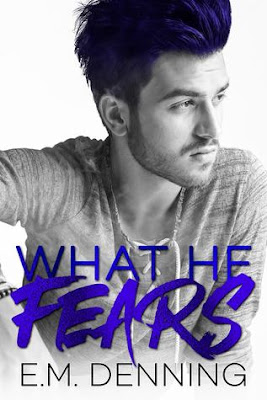 For years Andrew Jefferies warred with himself; if he went so long without realizing he was bisexual, what other things are inside of him that he has yet to discover? When he lands in the arms of Nick Young, the hottest cop he’s ever seen and Andrew is determined not to let his fear hold him back anymore. But Nick is a complicated man and Andrew’s pursuit of happiness will change both their lives in ways he never dreamed possible.

Nick Young would love nothing more than to settle down with Rory, his Dom, but his need to switch has been in the way of that ever happening. When a lost, confused, and very drunk Andrew slams into his life, Nick’s inner Dom wants to help the lost soul and soon a friendship develops into something more. As a switch, Nick has always struggled to reconcile the two halves of himself, just like he struggles to reconcile his two different relationships. But Rory sees a solution through the added complication of Nick’s feelings for Andrew.

Rory Gallagher has loved Nick for years, and for years he's feared losing the man he loves. But solidifying a relationship with a switch wouldn’t be fair because Rory won’t give up top spot for anyone. When Nick confides in him about his feelings Andrew, his heart nearly breaks. He hates seeing Nick so conflicted. Rory would do anything for Nick, including enter into the most complicated relationship of his life.

Can a Dom, a switch, and a man who is just now discovering all the truths about himself find a way to make a relationship work, or will Rory's scheme make his greatest fear come true, costing him two men he cares about?

With each book in the Desires series EM Denning proves that she is a master at her craft. How she's able to write both hot yet sweet novels is a talent that I can only marvel at.

Let's be real here I did not like Andrew. He was a dick in What He Hides and while I was excited for the possibility of redemption I figured it'd take me a while to love him. I was so wrong. Before the end of the first page I was in love. I wanted to scoop him up and take away his misery. Andrew is so sweet and I had to remind myself that until you get in a character's head you can't really judge them. That's the mistake I made with Andrew, I judged him before I really knew him. That only made me love him harder once I understood what was going in his head.

Nick and Rory come into Andrew's life at the right time. Not only for Andrew but for them as well. My heart was breaking for all of them. They were all hurting in their own ways and I was cursing EM Denning out in my head for hurting them. These sweet vulnerable men did not deserve the heart break.

Nick in all his swtichy glory is amazing. Kind, caring, and so in love with Rory. My heart breaks for him because sometimes love isn't enough. When he befriends Andrew and that connection is made it's beautiful and special and I was so happy to see the way they progressed. Nick was tied up in knots over having feelings for both Rory and Andrew. I wanted to hug him and tell him it would be okay. That was was special enough to have them both, despite how complex it seemed.

Rory is a Dom. He's sweet, he's caring, he has fantastic blue hair. He understands Nick and just wants him happy. His love is great, and though he feels selfish for wanting to hold onto Nick, he is so selfless, wanting him to find his happiness however he can.

Andrew is sweet, innocent, lost and so lovable. Despite having reservations about him he stole my heart with his innocence. He was the perfect man to bridge the gap for Rory and Nick. He gave them what they needed both together and separately. And they gave him what he needed most, love and understanding. Being with Nick and Rory opens Andrew up and he's able to accept himself and what he wasn't sure of in the previous book. I love how he makes up for his mistakes. We see enough of Xavier and Everett in this book to make my heart very happy. I loved those two so much. Seeing Andrew accept and reconnect with them makes my heart smile.

Having three people in a relationship is hard. It takes skill to be able to write M/M/M and have it work. I knew that EM Denning was going to be able to pull it off. She's proven that she can handle whatever subject matter she decides to tackle.

I love how the relationship between Rory and Andrew was a gradual thing. How Rory was willing to share Nick because it meant that the person he loved was getting what he needed. Andrew, sweet Andrew was so lost and these two men were so patient with him.

I enjoy reading throuples because it takes a lot of love, a lot of trust, and a whole lot of understanding to be in one. They fascinate me. The love between Rory, Nick, and Andrew is sweet, it's caring, it's everything that love is supposed to be about. Add in some hot sex, a commanding Dom, a sweet Switch and an innocent sub and you have a book that will both break your heart and then slowly piece it back together.

Each man is different, the relationships are different, there might be three of them but they all connect on different levels. There's always the fear when I pick up an M/M/M that it will go horribly wrong. You need to balance out a relationship not only between all three of the men, but they all need to have individual relationships that are just as meaningful. That's what What He Fears illustrates and executes beautifully. You get to see how Rory and Nick fit together, you get to see how Nick and Andrew are perfect for each other, and you get Rory and Andrew who find each other even though they weren't expecting it. This book is about three very different people who just want to love and be loved. It shows that love is love and happens in unexpected, fulfilling ways.

What He Fears is a great edition to what has become one of my all time favorite series. Now I get to sit and wait rather impatiently for book five.

P.S. There's a Death by Gnocchi joke in here, I'll let you read it and find what that means exactly. I just have to say that the Italian part of me thinks that's a fantastic way to go.

"The best things in life are found in the journey, not the destination. Self-discovery is a beautiful thing, Andrew. It's messy and confusing, but there's a magic in it that you won't find anywhere else."

"He felt safe, and cherished."

"Rory and Nick weren't the wrong choice. They were the only choice."

"He felt like his whole soul was open, and that if they looked in his eyes they'd see everything about him. And then, that became the reason he opened his eyes. He wanted to share himself with them. His whole self."