This is such a cute book about love, family, and friendship! -Abri

A Note From The Author

I’m Quinn Anderson, author of New Heights and the Murmur Inc. series. Welcome to my blog tour for Fourteen Summers! Stay tuned to get fun facts about this release, inside information about my writing process, and to learn how I chose my penname. Leave comments for a chance to win a $10 Riptide gift card. I look forward to chatting with you all! 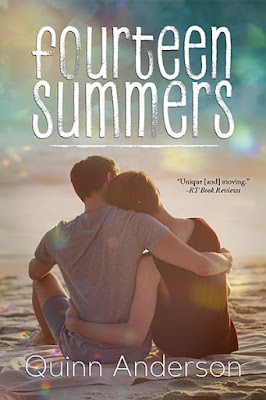 Identical twins Aiden and Max Kingsman have been a matched set their whole lives. When they were children, Aiden was happy to follow his extroverted brother’s lead, but now that they’re in college, being “my brother, Aiden” is starting to get old. He’s itching to discover who he is outside of his “twin” identity.

Oliver’s goals for the summer are simple: survive his invasive family, keep his divorced parents from killing each other, and stay in shape for rowing season. He’s thrilled when he runs into his old friends, the Kingsman twins, especially Aiden, the object of a childhood crush. Aiden is all grown-up, but some things have stayed the same: his messy curls, his stability, and how breathless he makes Oliver. Oliver’s crush comes back full force, and the feeling is mutual. Summer just got a whole lot hotter.

Fun-loving Max takes one thing seriously: his role as “big brother.” When Aiden drifts away, Max can’t understand how his own twin could choose a boy over him. Summer won’t last forever, and with friendship, family, and happily ever after on the line, they’ll have to navigate their changing relationships before it’s too late.

This book was cute. It features heavily on family, friendship, and first love and that is not a bad thing.

Aiden and Max are two very different people. They might look alike but they have personalities that are very opposite. They are also a little co-dependent on each other. Which makes things difficult for both of them when their best friend Oliver reenters the picture.

Oliver is kind, he's caring, and he's back in town after his parents messily divorced years ago. When he meets back up with the twins his summer begins looking up. Especially when he gets a chance to spend time with Aiden, the boy he's never gotten over.

Aiden and Oliver click. They're good to and for each other. And it is so sweet watching them fall in love. Despite the years that separated them you could still fel the connection they had when they were kids.

Max is jealous. Not because he wants Oliver, but because he no longer has Aiden at his side. While nothing can break the bonds of being a twin, the two have to rewrite their relationship. After so long of it just being the three of them it's hard for them to figure things out.

Quinn Anderson explores the relationships between all three characters and the story unfolds to tell one that is about love, family, and friendship. Something that is needed today because people get swept up in so many other things. So to able to read a book that is all about exploring changing relationships it's great.

These characters are real and deal with real life issues. It was sweet, caring, and was a joy to read.

Quinn Anderson is an alumna of the University of Dublin in Ireland and has a master’s degree in psychology. She wrote her dissertation on sexuality in popular literature and continues to explore evolving themes in erotica in her professional life.

A nerd extraordinaire, she was raised on an unhealthy diet of video games, anime, pop culture, and comics from infancy. Her girlfriend swears her sense of humor is just one big Joss Whedon reference. She stays true to her nerd roots in writing and in life, and frequently draws inspiration from her many fandoms, which include Yuri on Ice, Harry Potter, Star Wars, Buffy, and more. Growing up, while most of her friends were fighting evil by moonlight, Anderson was kamehameha-ing her way through all the shounen anime she could get her hands on. You will often find her interacting with fellow fans online and offline via conventions and Tumblr, and she is happy to talk about anything from nerd life to writing tips. She has attended conventions on three separate continents and now considers herself a career geek. She advises anyone who attends pop culture events in the UK to watch out for Weeping Angels, as they are everywhere. If you’re at an event, and you see a 6’2” redhead wandering around with a vague look on her face, that’s probably her.

Her favorite authors include J.K. Rowling, Gail Carson Levine, Libba Bray, and Tamora Pierce. When she’s not writing, she enjoys traveling, cooking, spending too much time on the internet, playing fetch with her cat, screwing the rules, watching Markiplier play games she’s too scared to play herself, and catching ’em all.

To celebrate the release of Fourteen Summers, Quinn is giving away a $10 Riptide credit! Leave a comment with your contact info to enter the contest. Entries close at midnight, Eastern time, on May 26, 2018. Contest is NOT restricted to U.S. entries. Thanks for following along, and don’t forget to leave your contact info!