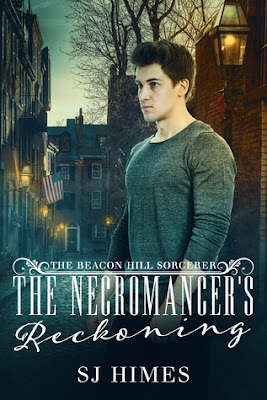 Every action has consequences.

For a decade, Angel Salvatore has been the most powerful sorcerer and only necromancer in all the Northeast. Never one to ask permission nor apologies, he has acted with near impunity for years.

The High Council of Sorcery has come to Boston, and Angel is their target. Charged with numerous violations of practitioner laws, his freedom and family are placed in jeopardy.

If found guilty, Angel's apprentice Daniel will be imprisoned to serve out the remaining years of his apprenticeship. Isaac, his brother, is too vulnerable to be left unguarded, and Angel fears for his sanity and health. And Simeon, Elder vampire and Angel's mate, refuses to see Angel convicted under the laws of the Council and his actions to keep Angel free threaten to start a war that could destroy their world. And Angel faces the severest of punishments—the castration of his gifts.

The Council has never cared for the people of Boston, and Angel doubts their motives. They have come for some insidious reason, and it has nothing to do with upholding the law and everything to do with Angel.

Dealing with an impending trial, a wayward ghost, and a graverobbing ring of thieves leaves Angel on the edge. He thinks he may have a handle on things until violence erupts across the city, and a stranger comes to town...a stranger with his own dark powers of necromancy.
*

I love this series. Angel is an angry retired twink with the rare affinity of Necromancy. Or being able to use death magic. He's snarky and doesn't put up with anyone's shit. He's quick to temper and due to being raise during a generations long war he's a "set on fire ask questions later" type of guy. I love him.

His mate, Simeon, is a four-hundred-year old vampire and probably the only one who can calm and soothe him. Together they can accomplish anything, but the "ruling" Government of magic, that's a whole different story. Or at least it should be.

I'll admit, I was a bit scared at what would happen during this book. The blurb and events at the beginning only spell out bad things for Angel and his family. I never should have had those fears though. Angel and Simeon dealt with what was happening as they always have. Together and with lots of magic, some violence, and being smarter than everyone else.

SJ Himes writes a series that is set in our real-world, but encases all types of supernatural beings. It's smart, it's written well, and it's characters are diverse.

Angel faces a lot in this book. From the Council, to the problems both his brother Isaac and his apprentice Daniel face, to a job he's hired out to do. The only bright thing is his bond with Simeon. The love between the two of them is so strong and I was a smiling dork whenever there were sweet moments between the two of them. If you've read the first two books you'd understand why. The soul deep connection they have is so special and they're perfect for each other.

Angel handles everything really well, considering people are trying to rip his family a part. He's resourceful, he has a lot of people in his corner, and he isn't afraid to do what is necessary to keep those he loves safe.

While I was reading I was going slower than normal as I didn't want it to end. I cannot wait for the next book in the series, which is going to be Isaac's book. I know though from things said about him in the first two books, and his POV points in this one that his book isn't going to be easy. The events that happened eleven years ago and the revelation from book two hurt him-- deeply. It'll be heartbreaking to read about his pain, but I'm confident that SJ Himes will give us a book that Isaac deserves.

I hope after Isaac and Daniel there's more for Angel and Simeon, they are one of my favorite couples and I loved seeing them so together in this book. Their bond is strong and it's a beautiful thing to see. After following Angel from book one it's good to see him let his guard down and be vulnerable with Simeon. To see him let go of his pain and anger and just be. Even through the danger this book shows just how much Angel has grown in the year or so since he let go and fell in love with Simeon.

These books are stories of major character development and love. Everyone goes through growing pains and these books show the pain and growth of seriously flawed characters. Which is one of the biggest reasons I love them.

SJ Himes wrote a book that exceeded my expectations. I cannot wait for more from these characters.

"You're so...I think wonderful is a good word for you."

"No, Simeon. If you die, I die. I've been there in the dark place before, those I love gone on without me, a wasteland of grief and death and nothingness. I don't have the strength or the will to survive it again. I set death on fire to end the pain, and I would not hesitate to do it all again. I love you, which means I want a long, long life with you."