Will the race for gold cost them their hearts? 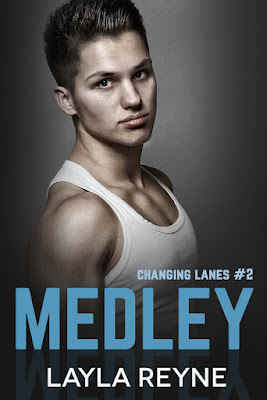 Sebastian Stewart was never Mr. Dependable; he was more the good-time guy who only wanted to swim, party, and ink tattoos. Until he cost his team the Olympic gold four years ago. Bas is determined to do right this time around—by his medley relay team and his rookie mentee.

Jacob Burrows is in over his head. The Olympic experience—from the hazing, to the endless practices, to the unrelenting media—makes the shy nineteen-year-old’s head spin. He’s trying to be everything to everyone while trying not to fall for his gorgeous tattooed teammate who just gets him—gets his need to fix things, his dorky pirate quips, and his bisexuality.

When Jacob falters under the stress, threatening his individual races and the medley relay gold, he needs Bas’s help to escape from drowning. Bas, however, fearing a repeat of his mistakes four years ago, pushes Jacob away, sure he’ll only let Jacob down. But the only path to salvaging gold is for Jacob to finally ask for what he needs—the heart of the man he loves—and for Bas to become the dependable one. 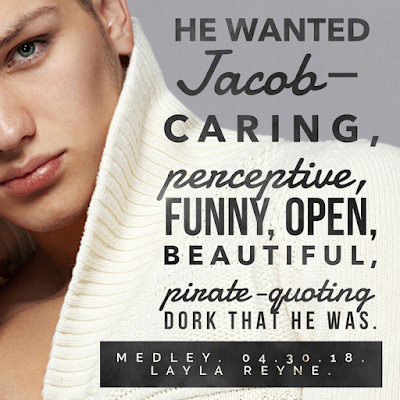 “How can you be your best when you’re not sure if your best will measure up? That’s the dilemma facing Bas and Jacob, as they deal with the immense pressure of swimming for Olympic gold while also trying to sort out their tangled hearts.” --Layla Reyne 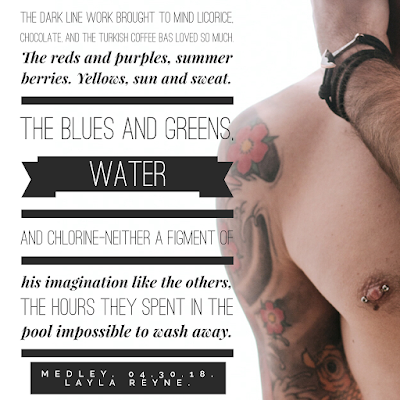 Ask someone to name their confessor and those were the usual suspects.

Bas would argue tattoo artist for the last spot in the top five. Humming needle in hand, he’d heard more than a few confessions over the years.

From the second a client stepped into his shop, they told a story. The design they picked. How much liquid courage it took. The tale of joy or woe that spilled from their lips after the first shock of the needle. Their reaction when it was done—relief, pain, regret, pleasure.

In love, in lust, in rebellion, in hate, in freedom, in chains.

But he still couldn’t figure out the story that’d nagged him most the past ten days. He swiveled on the stool in the rented studio, droplets of dark ink splattering his worn jeans. “You gonna give me something to go on, Pup?”

Straddling the fancy tattoo-massage chair, Jacob laid a cheek in the cradle and glanced to his side. Mint green eyes, tequila-hazy, peered out from under long burnished lashes. “This was your idea, not mine.”

Maybe there was the start of a story. Why did his nineteen-year-old teammate have a fake ID, and why was he so friendly with Mr. Cuervo? Was it the same story as countless other college undergraduates?

Jacob’s eyes slipped shut again, lips turning up in a faint smile. “You said you needed to get out of there and work.” He shrugged his bare left shoulder, the one closest to Bas. The breaststroker’s upper back was wide, like most swimmers’, his delts and lats hard and lean beneath suntanned skin. Not yet fully developed, given his age, but stronger than most. “So do what you need,” Jacob said. “Work it out.”

There was the start of the story. 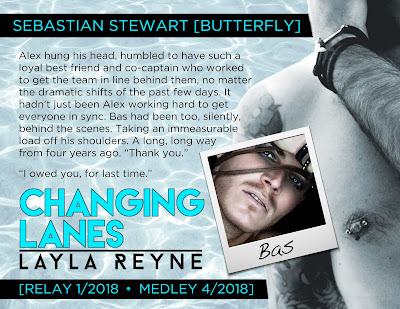 Author Layla Reyne was raised in North Carolina and now calls San Francisco home. She enjoys weaving her bi-coastal experiences into her stories, along with adrenaline-fueled suspense and heart pounding romance. When she’s not writing stories to excite her readers, she downloads too many books, watches too much television, and cooks too much food with her scientist husband, much to the delight of their smushed-face, leftover-loving dogs. Layla is a member of Romance Writers of America and its Kiss of Death and Rainbow Romance Writers chapters. She was a 2016 RWA® Golden Heart® Finalist in Romantic Suspense.


Giveaway: win 1 of 3 ecopies of any back catalog ebook by Layla Reyne