In Memphis, Tennessee, Satan’s Fury MC had become the most notorious MC in the city. That recognition hadn’t come easy. While people were visiting Graceland and walking down on Beale Street, my brothers and I were at war, fighting rival MCs and gangs who were trying to take control of our territory.
We had staked our claim, but when a new threat arrived, everything we had worked for would be put in jeopardy.

Kenadee Brooks was a nurse, trying to save lives and make a difference in the world. The moment I saw her, it wasn’t just her beauty that caught my eye. It was the light that burned deep inside of her that drew me in. I longed for it, and with each moment I spent with her, the more determined I became to make her mine.

But when she was pulled into my world, saw the life that I lived, would that light still burn bright or would it disappear forever? 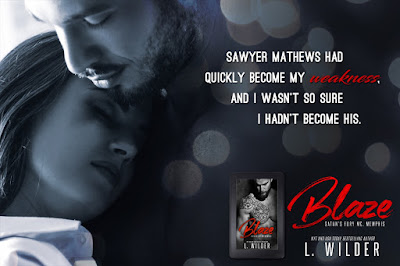 As soon as we walked through the door, it was clear that a lot had gone into the renovations. I looked over to Sawyer and said, “Have you been here since they’ve changed everything?”
“A couple of times. Kevin likes to come look at the fish.”
“This is amazing.”
“I was hoping you might like it.”
We spent an hour or so just walking around looking at things and then he asked, “You ready to go up?”
“Sure.” He led me over to the elevator that took us up to the lookout deck. Once we made it up to the top, he reached for my hand and I followed him outside. We stepped out onto the deck, and the view was absolutely incredible. You could see the Mississippi River and all of downtown. “It’s beautiful. I can’t believe I’ve never done this before.”
He slipped his arm around my waist and said, “Not nearly as beautiful as you.”
I rolled my eyes as I said playfully, “Really? I didn’t think a stud like you would need to use a cheesy line like that.”
“I take offense to that.” He chuckled. “I wasn’t using some cheesy line. I was simply giving a compliment to a beautiful lady.”
“Um-hmm. If you say so.” I giggled.
He poked me in the side. “So, you think I’m a stud, huh?”
“You picked up on that one, did ya?”
“You’re the one who said it.” Just then, a surprisingly playful expression crossed his handsome face. “So, you think I’m a stud. I like that. My beauty thinks I’m a stud.”
Shaking my head, I started walking towards the door. “Okay, that’s enough of that.”
“Hey! Where ya going?”
“I’m hungry.” Hoping to distract him from the stud comment, I asked, “How about some lunch?”
“Yeah.” He smiled and patted his stomach. “This stud could go for something to eat.”
Trying to bite back a huge grin, I sighed and said, “Move it stud. This beauty is withering away. I must eat before I starve.

Leslie Wilder grew up in a small town in West Tennessee. A country girl at heart, she’s always thought that life is too short, but she had no idea how short it really was until her brother passed away in 2014. She’s always been an avid reader, loving the escape only a great book can give, and wondered if she had what it took to write one of the wild romances she’d come to adore. With the support of her family and friends, she published Inferno: A Devil Chaser’s MC, one year after her brother’s death. With him in mind, she fulfilled her lifetime dream of writing. Since then, she’s completed the Devil Chaser’s Series and continued on with the Satan’s Fury MC Series. She has so many stories in her head, and can’t wait to share each and every one.
Leslie has been blown away by the support of her readers, appreciating every message, review, and encouraging word she’s received over the past year. She looks forward to continuing this journey with them for years to come. 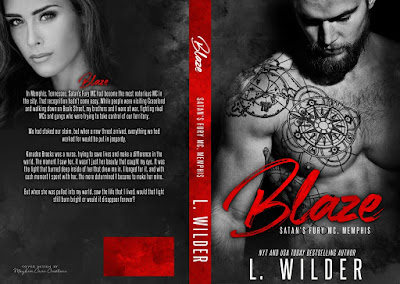