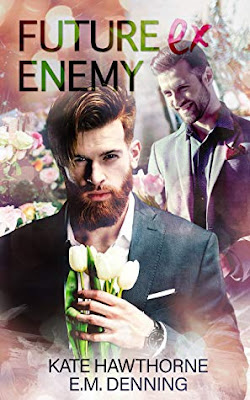 If there's one thing David Cranston hates, it's Luis Montgomery.

When he finds out they've both been invited to participate in a floral contest that could make or break both of their careers, David dives in, ready to win.
But there's only one problem, and there's only one bed.

David and Luis are forced together and tension isn't the only thing running hot between the two of them. David realizes he wants to come out on top...in more ways than one.

A drunken night and a hungover morning leave both men regretting actions that found them a little bit too close. Unfortunately, they keep getting closer, and closer, until the lines between hate and desire blur into something far more complicated than either of them bargained for.

Back home, Luis and David struggle to make sense of their feelings, and Luis has to face some hard truths. He thought he hated David and his roses and his baby's breath and his lemon verbena lotion, but he was so wrong.

Because if there's one thing Luis Montgomery loves, it's David Cranston.

Y'all already know how I feel when Emo and Evil Word Magician get together and write books. There's nothing they could write that I won't read. I may have a *slight* addiction to their books. When I discovered they weren't only writing another book set at Mallory, but it was enemies to lovers, I may have died just a bit. My favorite fictional vineyard and my favorite trope of all time? Yes, please.

David and Luis are rival florists, David set in more traditional arrangements, while Luis has a fresh, new perspective and way of doing things. It makes for lots of tension and scathing comments on floral arrangements, things I didn't know I needed in my life. When I say tension I mean tension. So much that when it finally explodes into angry kissing I clapped and squealed.

Thanks to a traditionalist mother, and two grooms who want unique, fresh looks, David and Luis get pulled together to work on the same wedding at Mallory. Which leads to locked doors, knocked over flowers, and the best angry kissing I've ever read. Their success on the wedding has them becoming contestants in a competition that could change the direction of both their careers—and possibly their relationship.

What's worse than having to compete against your enemy? Having to share not only a room with him but a bed. Forced proximity makes for an interesting weekend. Like, hate sex over the bathroom counter using lotion as lube. The book could have ended there and I would have been happy. Hate sex is the best thing ever and that scene was everything I wanted it to be and more. These two authors are known for their hot and heavy, yet emotionally charged sex scenes. And they did not disappoint in this book. Though the only thing I will say about the hate sex is there was no spanking and I feel robbed. There was a lot of thinking about spanking on David's part and not enough action, sadly. But that doesn't mean I didn't enjoy the hell out of the explosions that come with hate sex.

I think, what I loved most, besides the hate sex and angry kisses, was the flowers. Not because the characters were florists by trade, but because of what those flowers meant to them. For David, they were his family legacy, his way of life. For Luis, they were a new direction in life. For both of them, they were the starting point into finding their happy ending.

The transition from enemies to lovers is a tricky one, not everyone can pull it off, can make it believable. I had no doubts that these two authors would be able to do it. When each character realizes that it's not hate they feel, but something else, it's precious. Watching them figure out what to do with each other now that they don't have hate to fall back on is sweet.

In the end, enemies to lovers books have been ruined for me because this book was everything I love and then some. I am so glad we got to go back to Mallory and hope that there's more in the future because I love it and these two write magic books together.

"He didn't want to be hated in that moment...He wanted to believe, selfishly and foolishly, that Luis didn't hate him and that he didn't hate Luis."

"He'd been brave in his hatred for Luis. The two emotions had been so entwined that without one, the other also ceased to exist. Were it not for Luis's biting tongue and his lack of cooperation, David might not have had the courage to kiss him again."

"I want to be the spoon that spanks your ass."
Book Talk Reviews