Ethan is such a cinnamon roll 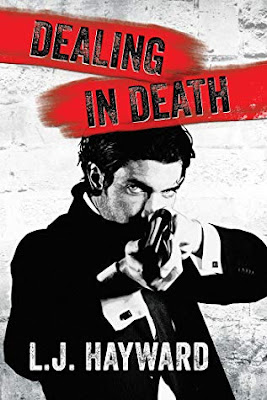 I’ve spent my whole life dealing in death, efficiently eliminating targets while fighting to preserve a sense of self and morality, to avoid becoming as detached and ruthless as my siblings. I thought I had succeeded. Then I met Jack Reardon—contrary, handsome, forgiving, and far too good for the likes of me—and my life was tipped upside down. When he asked me to move in with him, he didn’t specify that I had to quit my job, but I wanted to—for myself, not for him. I should have known it wouldn’t be that easy.

My old instincts—“Ethan Blade”—are soon tempted out of retirement by a job offer I can’t afford to refuse and by an old hook-up of Jack’s he’d be a fool to refuse. While falling prey to my own temptation, Jack struggles with his. Which is precisely when the true danger exposes itself—one of my siblings with no such sense of self or morality. Only pain. And he is prepared to rain it down on me and Jack, unless I can square the Ethan Blade I want to be with the one I need to be, in time to save us both.

Dealing In Death is the latest book to come out of L.J. Hayward’s brilliant mind. It’s Ethan’s POV of what happened during the events of Why The Devil Stalks Death, but it’s also so much more than that. We get to see Ethan vulnerable and it breaks my heart. Who knew a man like Ethan Blade was such a cinnamon roll? Jack’s starting to figure it out, but the man behind the mask is so much more than Jack will ever suspect and what I was expecting.

When I found out we were getting a whole book in Ethan’s POV I was ecstatic. I’ve loved him since we first met him. I knew there was more to him than we were allowed to see. Even after reading a whole book in his head we still don’t know everything about him. There’s so much to unpack when it comes to the former assassin that I’m sure L.J. Hayward could write a bunch more books and still not get to it all.

We don’t just get to see what domestic bliss was like from Ethan’s POV, but we get to see how he felt about Jack before they were nothing more than adversaries. We got to see him at his most vulnerable, not only when it came to his feelings for Jack, but his relationships with his siblings as well.

As we learned in Why The Devil Stalks Death, Ethan spent his free time trying to get Two to leave Australia and let Jack and Ethan be together in peace. That’s not all he did, however, no spoilers, but Ethan obviously didn’t take to retirement easily. To break from the game in the way he truly wanted, he had to do things that would make Jack kill him. My heart went out to him because I could see just how hard he was trying to leave his past behind for himself and for Jack. He desperately wanted to be the man he thought Jack deserved.

What I loved about this book is how honest Ethan is with himself. While he fights to keep up the image of being the man he thinks is perfect for Jack, he’s honest with himself about his feelings. His wants and needs. It would almost be unexpected if it wasn’t so obvious. Ethan has always had a better grasp of what was going on between the two of them than Jack. He might have had doubts about Jack, might have been insecure and omitted his feelings aloud, but it’s in his seemingly perfect control that you can see the flaws. It’s in his honesty with himself, not the lies he’s forced to tell. His insecurity, his desperate want to be in as functioning of a relationship with Jack as possible.

It’s almost painful how much Ethan tortures himself with doubt and insecurity. It makes me want to shake Jack. I can understand where both men are coming from now and it’s frustrating to see how blind they both were to each other. Yes, being in a relationship, living together, trying to figure themselves out is new to both of them. But neither of them were smart enough to step back and realize how their actions would look to the other. Hopefully now that they have a lot of things out in the open between them we’ll be able to see them work seamlessly together. Because there’s no denying that when they’re together, working towards a common goal, they’re powerful. Now that the air has been cleared I can only hope they keep the lines of communication open for book three.

Dealing In Death does more than just trace Ethan’s steps as he goes from assassin to retired, from Two’s toy to a free man. It shows us depths to Ethan Blade that we never would have gotten otherwise. It was a look into the character we’ve been falling in love with from the beginning. It was a promise of what’s to come in the next book. It further proved L.J. Hayward’s brilliance as a writer, as it gave more layers to a story we had gotten previously. I cried for Ethan as I saw his perspective of certain events and my heart aches for him and what he’s gone through. If I could I would wrap him up and keep him safe from everything and everyone set out to hurt him.

In watching Ethan try so hard to bury who he was and try to become who he wants to be, I have both excitement and nerves when it comes to the next book in this series. I have a feeling it’s going to be a very defining ride for these two. I’m ready for it. Maybe.

“I felt whole and real and alive. I felt safe. Secure enough to let it all go and just exist.”

“For a man who could be rather unforgiving, Jack absolved me of so many sins I could sometimes forget I wasn’t good enough for him.”

“He saw through my plan. As he’d always done. No matter the shields I put up of the wall I hid behind, Jack saw me. All the scars and the weapons and the fake names meant nothing to him. Even after I hurt him.”

“I glanced down into the gun emplacement he was scouting and was struck anew by how he made me feel. Not just the types of emotions he inspired—because he sparked them all in me, lust, joy, fear, anger, contentment, love—but the simple fact that he made me feel anything at all. I would fight for that until all the blood was gone from my body. I would fight for him. For us.”
Book Talk Reviews