There's nothing wrong with chandeliers 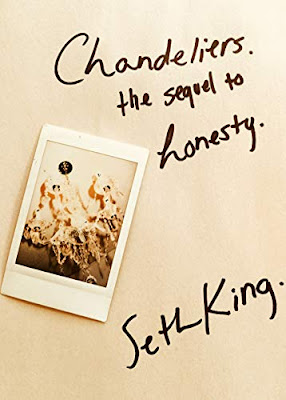 Can someone really find another soulmate after losing their first?
Or is true, wild love only found once in a lifetime?

Thousands of readers across the world fell under the spell of Seth King’s Honesty, a haunting story about first love and self-acceptance. Today, Seth King is back to answer the question: can true love ever strike the same person twice? Or is first love simply a beautiful trap, dooming us to forever measure our future relationships against “the one that got away?”

Five years after the shattering loss of his first love, Coley Furman is living a whole new life. He ran off to Savannah, Georgia and became a writer, just as he promised his first love he would, and against all odds he is finally moving on and starting over in a way nobody ever expected. Everyone deserves a happy ending, and at long last, Coley found someone who makes him believe he does, too.

But on the eve of the biggest day of his life, a letter arrives in the mail from a ghost from Coley’s past, a letter revealing a secret he never knew about…and soon, everything is on the line.

Chandeliers is a story about love, loss, acceptance, and the wild courage it takes to be all the way alive.
If you have ever loved and lost someone, and then tried to find the bravery to find someone new, Chandeliers is for you.

Seth King blew me away with Chandeliers. I was excited to visit with Coley again, but I wasn’t sure what to expect, especially once I discovered it was five years later. My heart immediately ached for him and what he had to go through during that time. I was crying within the first three pages.

I knew going in that this book was not going to be a direct sequel to Honesty. And it wasn’t. It was so much more. So much better than a direct sequel would have been. Because we got to see the growth of Coley, we got to see him live and love and learn. Chandeliers made it okay to move on from Honesty.

Honesty was about two boys who fell in love over the course of a summer. It was as far from a perfect love story as one could get. It was hard and I had to read it twice because the first time I set it down halfway through, not ready to deal with the heartbreak I could feel coming. Chandeliers is about a broken boy who learns not only to love after tragedy but to live. It’s not about second chances, but second love.

We get to see Coley live his life. We see him get out of his small town and move somewhere he can be himself. We see him bloom and emerge from the shell he was shoved into for so long. We see him fall in love again. Yes, Coley falls in love again, to a man who loves him like he deserves and it’s beautiful to see.

This book is for anyone who’s lost someone. Whether it’s to death or just to life. It’s for the people who learn to live after spending a lifetime trying to be what other people want them to be. There's so much hope and love and relatability and it makes you want to believe in love. In second love that is just as powerful as first love—even though they are two completely different things.

Coley learned a lot about himself. He learned a lot about love. About forgiveness. It was hard watching him struggle between his new life and love in George and what he had with Nicky. Because there was something special in Nicky and Coley’s relationship, as flawed and damaging as it was. We got to watch Coley grow up in this book. We got to watch him heal. That’s what Chalendeliers is, it's a healing book. It makes it okay to grow up and move on while still missing and loving what you once had and god it was perfect.

We learn new things about Coley and Nicky and their relationship and we understand it better. It killed me to read. I sobbed, but it was cleansing as well. Because like Coley we got answers that were a long time coming and we got to heal with him.

Seth King didn’t give us a direct sequel to Honesty because that wasn’t what the readers needed. It wasn’t what Coley needed. Chandeliers is a new chapter. It's beautiful and heartwarming while also being heartbreaking. It was perfect.

“To be human is to hurt, and you cannot run from the pain forever.”

“Those who had loved desperately once before, and then lost it, still already knew they could love in the first place.”