“Don’t have a best friend that’s a girl” — this was the advice from my older cousin. I didn’t take it. Because he followed with, “friends don’t f*ck friends. And you’ll want to f*ck her.” It was terrible advice.

Now I’ve signed back on to the same Vegas acrobatic show as Baylee, working together for the first time in years. And she tells me that she’s having trouble in a certain “area” of her life — because of our past.

“You can help me fix it,” she says. And then she hands me a list. 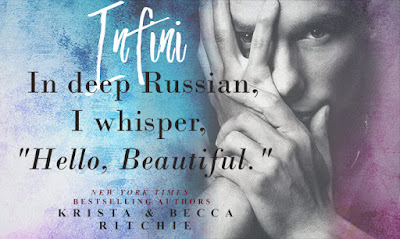 Krista & Becca Ritchie are New York Times and USA Today bestselling authors and identical twins—one a science nerd, the other a comic book geek—but with their shared passion for writing, they combined their mental powers as kids and have never stopped telling stories. Now in their early twenties, they write about other twenty-somethings navigating through life, college, and romance. They love superheroes, flawed characters, and soul mate love. They are the New Adult authors of the Addicted series and Calloway Sisters spin-off series, and you can find them on almost every social media, frolicking around like wannabe unicorns.
Website | Facebook | Twitter | Goodreads | Newsletter