Release Blitz; Confessions of a Nerdaholic 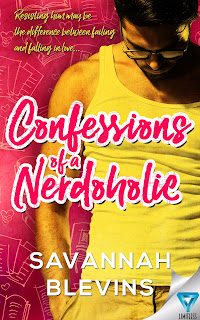 
— SYNOPSIS —
Eloise Duncan has a type. Skinny jeans and black rimmed glasses. She’s a nerdoholic and she isn’t ashamed…

Eloise isn’t the party all night, keg stand kind of college girl. She works part-time at the Sugar Cube bakery to pay her rent, and keeps her nose in a book. Even with her perfect academic record, and above par study habits, she manages to still have a failing Anatomy grade at mid terms. To cheer herself up, and make the extra study hours a little less torturous, she stops by the library a few hours a week to check out, Oliver Edwards, the guy of her dreams that doesn’t realize she exists. At least, not yet.


Eloise has a plan. Every guy, even nerds, can’t resist a good cupcake, and Eloise makes the best cupcakes on earth…

She leaves one of her famous strawberry cheesecake cupcakes on top of Oliver’s chemistry book when he takes a bathroom break. In fact, she does it every day for a week. And every day, Oliver’s smile at her kind gesture gets bigger and bigger. It’s enough to brighten her mood, but not enough to bring her grade up. That is until she accidently hits Oliver in the crotch with her anatomy book. Turns out, Oliver isn’t just hot, he’s also nice and forgiving. He offers to tutor Eloise in exchange for an endless supply of sugary treats.

It doesn’t take long for study sessions to turn into make out sessions. It’s a daydream come true, except for the fact that if Eloise doesn’t pass Anatomy, her father will jerk her out of school…

Her father never wanted her to go to her mother’s alma mater at Maryland State. He wants her back on the west coast, following in his foot steps at Pepperdine. He’ll use her bad grade to bring her home. Will Eloise be able to tame her nerd lust long enough to make the grade she needs to pass her class, or will she have to leave her new love behind in…
Confessions of a Nerdoholic.

ADD THE BOOK ON GOODREADS 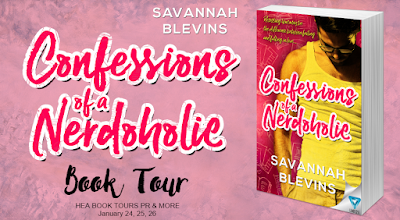 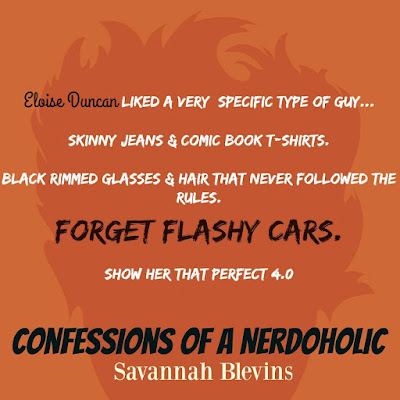 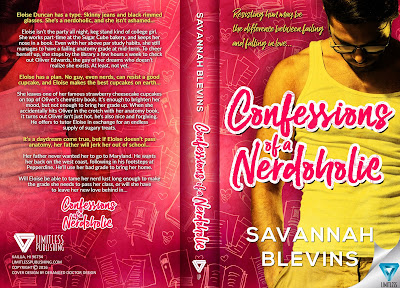 — ABOUT THE AUTHOR: SAVANNAH BLEVINS —
Savannah was born in Hyden, Kentucky. She received her M.S in Speech Language Pathology from The University of Mississippi in 2009. She’s been writing since the early age of nine when she begged her parents for a type writer for Christmas.

She now lives in Corbin, Ky with her husband of eight years, John, and their two wonderful daughters, Delilah and Gracie.

When she isn’t working, or running after her kids, she spends her free time traveling the country with her husband. There is nothing better than a day of football in the grove, a late night of basketball at Rupp Arena or slapping the glass to celebrate another Washington Capitals goal.

She is a strong believer that with enough hard work and determination you can accomplish anything.