L.J. Hayward tried to kill me with this book 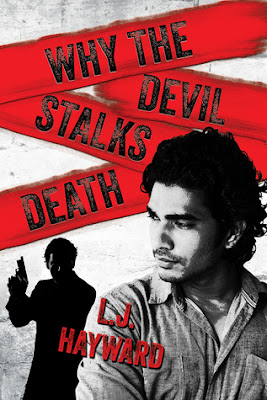 Jack Reardon uncovers secrets for a living, and the Meta-State spy is pretty good at it. Or rather he thought so until he met Ethan Blade—assassin, warrior, enigma. The unlikely pair have decided to give living together a shot, but Jack’s not entirely certain what he’s gotten himself into—or exactly who he’s in it with.

Jack’s worries are compounded when he’s assigned to a police strike force hunting a serial killer. With each new puzzle piece, Jack considers the true nature of a serial killer—and how similar it is to an assassin. To one particular assassin who’s having trouble adjusting to retirement. Jack’s unsure how to help Ethan—or if he even can.

When the killer strikes close to home, Jack must race against the clock to stop another murder, despite the price someone has put on his head. Could the matters be connected? Is a certain assassin at the centre of both? Surrounded by killers, the only one Jack wants near disappears, leaving Jack drowning in secrets. He’ll have to do what he does best—unravel the secrets, including Ethan’s—to stop the killer and save the life he and Ethan have only just begun to build.

Child abuse and child sexual abuse in a character’s history and not depicted directly on the page.

I've been waiting for this book since I finished the first one. If you haven't read Where Death Meets The Devil you can read my review here. I said in my first review that book one didn't need a sequel but I would love if we got more, especially with the way it ended. Then L.J. Hayward went and did something better, she gave us three novellas. Those novellas were both a blessing and a curse. It was nice to see how they ended up from book one to book two, but they were a huge tease to this one.

Why The Devil Stalks Death is told in the same alternating timeline as the first book was. Except where it was a year between the past and the present in book one, book two everything happens within a month. Meaning this book is fast paced and you have to piece the puzzle together along with the characters.

Jack and Ethan are living together now. They went from enemies to lovers when convenient, to more (even if they can't admit it), to live in lovers.

Ethan is retired from being one of the most wanted assassins. Which as you can imagine is a struggle. Of course, we only get to see what transpires from Jack's POV, but based on some of Ethan's actions I can guess at just how conflicted that left him. Though we do get the answers to a lot of questions in this second book. That helps us understand the enigma that is Ethan Blade.

Jack is tasked out to help catch a serial killer, but it quickly becomes obvious that there's more than meets the eye going on. The problem is getting answers before someone else gets hurt. In between that he's trying to adjust to having his former elusive lover in his apartment 24/7.

Things are hot and heavy between these two characters. They're also a bit dangerous. We all know that they can fight, they can hurt each other--emotionally as well as physically. It becomes a balancing act for them. If their different paths don't try to tear them apart.

Secrets come out. L.J. Hayward takes us all for a ride that is full of heat, danger, love, and trust. Because that's what it comes down to. Do these two characters trust each other enough to make it through the latest storm?

Jack and Ethan have grown and evolved from Where Death Meets The Devil. Jack is no longer coasting through life, he has something--someone--worth fighting for. Ethan is no longer moving from job to job. He has someone he wants to trust and build something with. If his past ghosts don't stand in his way.

I need book three. Now that I got what I wanted I need to see more of it. Jack and Ethan are starting to build a foundation, they're beginning to learn that life is more than just the job. More than just coasting through life. They're trusting, they're loving...even if they still don't understand the last part. Ethan might, but getting into his head is still difficult. And Jack, well he's doing better but he's still flighty.

The thing I've been waiting for happened and I squealed. And I hugged my kindle. And I read that scene over and over again because how could I not? I've been waiting and L.J. has been teasing and it finally happened and now I am all the happy. Yes, I'm also a tease, but if you've read Where Death Meets The Devil and all of the novellas then you know what has been between them. Since we don't spoil things here all I can say is that it was perfect and way better than I imagined. It was so worth staying up all hours of the night to finish the book.