Release; Off The Ice

Off the Ice by Avon Gale and Piper Vaughn 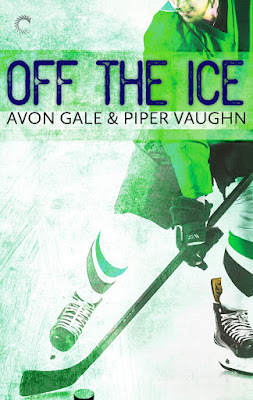 NHL star Tristan Holt may be at the top of his game, but he’s already thinking one play ahead. Hitting the books in the off-season means he’ll have a business degree to fall back on when it’s time to hang up his hockey skates.

But his straightforward plan is complicated by his undeniable attraction to his sexy sociology professor, Sebastian Cruz.

Impressed by Tristan’s brain as well as his brawn, Sebastian can’t help lusting after the gorgeous jock. With tenure on the line, Sebastian won’t break the rules by becoming involved with one of his students—at least, not until the end of term. Once final grades are posted, though, their naughty mutual fantasies can become reality.

Tristan’s not sure he’s up for being the poster boy for openly gay hockey players, but Sebastian’s never been the type of man to keep his sexuality—or his relationships—in the closet. For Tristan, being with Sebastian might mean risking more than just his heart.

One-click with confidence. This title is part of the Carina Press Romance Promise: all the romance you’re looking for with an HEA/HFN. It’s a promise!

For a time the music distracted him. Tristan swayed in place, caught up in the energy of the now-substantial crowd and enjoying the rare opportunity to hear his favorite songs played live. That wasn’t always easy for a classic rock fan whose favorite groups no longer performed, and who, generally speaking, wasn’t all that into cover bands.

But soon the novelty wore off. Tristan noticed the time and the distinct lack of one Sebastian Cruz. Like the flame of a candle, his excitement flickered and abruptly sputtered out, leaving nothing but wispy smoke in its wake.

Concerts were a lot more fun when you had someone else to share the experience with. Couples and groups of friends filled the venue. Tristan was one of the few who watched alone, conspicuous in the way he stood apart from the others.

He frowned, deposited his empty bottle on the tray of a passing server, and made his way to the bar for another beer. During the regular season he normally limited himself to two, preferring to get his carbs from food instead of alcohol, but fuck it. Training camp didn’t start for nearly another two months. After being stood up, he was due another drink or three.

Tristan snorted. Why was he kidding himself? Professor Cruz never had any intention of meeting him. He’d probably regaled his highbrow academic friends with the story of his student’s clumsy attempt to ask him out. No doubt they had a good laugh about it while drinking wine and eating canapés or whatever the hell else snobby professors did in their spare time. Tristan already knew what Sebastian Cruz thought of athletes.

He’d just flagged down a bartender and placed his order when he sensed a presence at his side. Tristan turned and found himself face-to-face with the man himself. Professor Cruz was dressed casually in dark jeans, boots, and a button-down shirt. He’d left the top two buttons undone, and Tristan’s gaze automatically went to the prominent collarbones covered in smooth golden-brown skin. All the moisture fled his mouth at the thought of putting his lips to the divot at the base of Professor Cruz’s throat. Tristan wanted to bite and lick there, inhale until the scent of sweat and man made him drunk with lust.

Tristan swallowed hard. “Professor,” he rasped. Sebastian, Tristan really wanted to call him. The name appealed to him as much as its owner. Tristan wished he had the right to use it whenever he pleased.

The bartender delivered Tristan’s beer and grabbed the money Tristan had placed on the bar top. He jerked his head at Professor Cruz. “What can I get you?”

“Single malt, neat. Glenlivet, preferably. If not, the best you have.”

Of course he would drink Scotch and order it neat, the sexy bastard. Tristan pictured him as the leading man in some classic black-and-white film—crystal tumbler in one hand, a thick cigar between his lips, a plume of smoke curling around his sharp-jawed face. The image sent blood rushing straight to Tristan’s cock. Shit. There went all his bitter thoughts from a few minutes before, carried away by the rumbling bass of Professor Cruz’s voice and the sight of his dark-brown eyes and darker, finger-tousled hair.

Tristan almost sighed. He was weak—he knew it—but how could he be strong with Professor Cruz standing here looking like that? Tristan wanted to drop to his knees. Only awareness of his surroundings kept him upright.

After starting a tab, Professor Cruz inclined his head, silently encouraging Tristan to follow. They moved away from the bar to a small gap along the back wall.

“How’s the band?” Professor Cruz asked, his eyes fixed on the stage.

Tristan watched, wetting his mouth as Professor Cruz took a slow sip of the amber liquid in his glass. “They’re good, I think,” Tristan replied. “I stopped paying attention a little while ago.”

Professor Cruz glanced at him. “Why?”

Tristan smiled wryly. “I was waiting for you.” 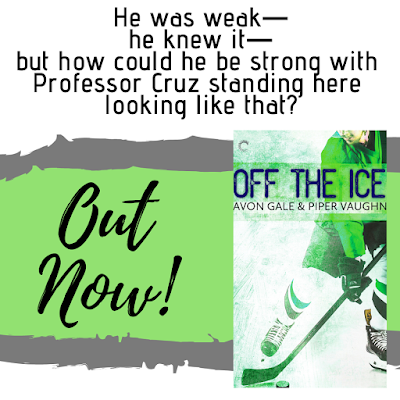 This is one of my favorite student/teacher romances. The hot hockey player is just a bonus.

I read this book when it originally released and I reread it for this review, something that rarely happens. I was happy to say that what drew me into the story the first time around was still there. I was sucked into the love story of Tristian and Sebastian.

These two have an age gap, the student/teacher taboo, the professional athlete trope. There's a little something for everyone in this book.

Tristian and Sebastian not only need to navigate a relationship with their careers, but with the fact that Tristian isn't out. There's a bit of an ultimatum, but I think with the way it's written it's not that big of a deal. Normally that wouldn't fly with me, but the characters were respectful and made their choices without being pushed by each other.

I'd read this book for a third time, that's how much I enjoyed it. The characters are great, the story is well written, it's a solid start to a new series.

Piper Vaughn is a queer Latinx author and longtime romance reader. Since writing their first love story at age eleven, they’ve known writing in some form was exactly what they wanted to do. A reader to the core, Piper loves nothing more than getting lost in a great book.

Piper grew up in a diverse neighborhood in Chicago and loves putting faces and characters of every ethnicity in their stories, making their fictional worlds as colorful as the real one. Above all, Piper believes there’s no one way to have an HEA, and every person deserves to see themselves reflected on the page.

Avon Gale lives in a liberal Midwestern college town, where she spends her days getting heavily invested in everything from craft projects to video games. She likes road trips by car, rock concerts, thunderstorms, IPAs, Kentucky bourbon and tattoos. As a queer author, Avon is committed to providing happy endings for all and loves to tell stories that focus on found families, strong and open communication, and friendship. She loves writing about quirky people who might not be perfect, but always find a place where they belong. In her former life, Avon wrote fanfiction at her desk while ostensibly doing work in non-profit fundraising for public radio and women’s liberal arts education, and worked on her books in between haircuts and highlights as a stylist. Now she’s a full-time writer, delighted to be able to tell stories for a living.