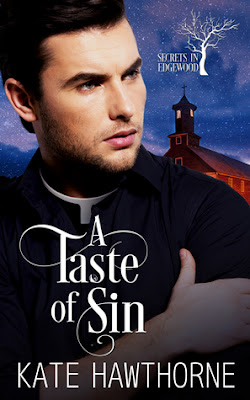 Reed Matthews lives a quiet and structured life in Edgewood. A devout Catholic going on his sixth year as principal at Our Lady of the Mount School, Reed thrives on routine. But one unplanned excursion for Chinese takeout is enough to send his meticulously-constructed world into a tailspin.

After growing up in foster care, Dominic O'Halloran decided to enter seminary in his early twenties, and he's dedicated his adult life to creating space for the LGBT community within the church. Weeks after answering the call from St. Paul's Episcopal Church and moving to Edgewood, Dominic finds himself face-to-face with the one person he's never been able to leave in the past--his childhood best friend.

Dominic and Reed find themselves entangled in decades old unresolved feelings and a new and very urgent lust. Reed is terrified of damning his soul, and Dominic is worried about losing his heart. But all it takes is one make-believe kiss for them to realize they'd throw everything away for another taste of sin.

I will preface this review by saying I do not read priest books. I've tried but they don't usually sit well with me. Nothing against the authors or anything, but there has always been something that prevented me from enjoying the storyline in that kind of setting.

I chose to read this book because I know Kate Hawthrone. She's my Evil Word Magician. She's been known to work magic so I put myself into her hands and trusted her.

I was not disappointed.

A Taste Of Sin is angsty. Like so angsty. I wasn't very far into my reading when I messaged my best friend like "this book makes me want to drink." There's so much tension between these two characters my heart was both bleeding for them and was frustrated with their back and forth.

Reed is very lost. He lives a structured life and tries to pretend he's content in it. It's not until Dominic walks back into his life that he realizes he's been lying to himself for over twenty years. For Reed, it's hard to come to terms with his desires and his religion. He absolutely broke my heart and pissed it off at the same time. His hot and cold, while understandable, was unfair to both of them. Reed does a lot of growing, a lot of thinking, a lot of accepting in this book and it's admirable because the decisions he has to make aren't easy ones. Especially when you know deep down that it's okay to feel the way you do but have yet to come to terms with what those feelings actually mean.

Dominic, oh Dominic is just everything. All I'll say is that if he were my priest I sure as hell would go to church more often than I do. Dominic has loved Reed since they were kids. He spent years hurting for the boy he lost, only to come face to face with him after finally closing off that part of his heart. I felt for him so much. He loved Reed but he didn't want to get hurt by Reed. And I didn't blame him. No one wants to get their heart broken.

These two men had so much going against them. Even though Reed wasn't sure about anything when it came to Dominic, he still followed his desires. He clung to his misguided faith, but in doing so he let it lead him to what was truly important to him. Seeing him learn and grow with and without Dominic was special. Because he was able to get to a place where he realized he could have both. Where he was allowed to have both.

I think that's one of the things that causes me to stay away from the other priest books. The back and forth, the use of faith to push the character one way or the other. While A Taste Of Sin is not preachy at all. It does have some very good points about faith that I am glad are in there. With Reed's struggles and eventual acceptance of himself, the reader can see that it may be possible for them to come to terms with their life. That may not be the intention, but it's there and I am so grateful it is.

Kate Hawthorne wrote a book featuring a rather sensitive subject matter and she turned it into a love story about two men that left me speechless. It was angsty, so angsty I thought I would explode before any of the good stuff happened. It made me cry, in public no less. Besides the fact that Reed and Dominic took their sweet time getting on the same page, this book was brilliantly thought out and smartly written.

A Taste Of Sin is book one in the Secrets in Edgewood series and I cannot wait to find out what else this town has in store for us.

"The covenant he shared with Nic was not sinful. If there were things he needed to repent for, it was not loving someone, and it was not for demonstrating that love."