Christian is so cute 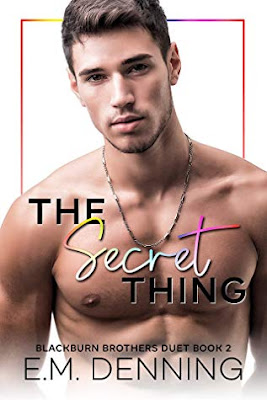 On the cusp of starting college, Christian Blackburn has had enough of his meddling, helicopter mother. He lucks into a room in a gorgeous house close to campus and away from the noise of dorm living. His landlord, Brandon, is a welcome surprise. It doesn’t matter to Christian that Brandon is twice his age. He’s good looking, kind, a hell of a cook, and he doesn’t treat Christian any different because of his seizures.

If only Brandon wanted him back.

Brandon Hayes is comfortably divorced, but his life would be better if well-meaning people kept their nose out of his affairs. To ease his ex-wife’s concern that he’s living in a house far too big for just one person, he takes on a roommate. The much younger Christian is smart and charming. He’s older than his years, and his presence in Brandon’s life wakes something up inside he’s kept hidden from everyone. Having Christian around reminds Brandon of his attraction to men, a pull he can’t ignore.

One kiss changes everything.

Their chemistry is off the charts and their lives fit together in a way they never expect them to. Battling the age difference, a nosy parent, and the fear that people won’t accept them as a couple, they agree to keep their relationship secret. After a tumultuous weekend away, Christian decides that he wants Brandon by his side, and doesn’t care who knows about them. But what will happen once all Brandon’s secrets are out in the open?

I thought The Sweetest Thing was...well the sweetest book that EM Denning had ever written. That is no longer true, The Secret Thing is giving its predecessor a run for its money.

When we first heard about Nathan's younger brother, Christian, in book one, I was curious about his story but not overly so. And then some things happened in and I got more curious about him because he seemed so sweet and naive and I wanted to make sure he was okay.

Christian is tired of his overbearing mother and protective brother hovering over him and I don't blame him. He's young and yes, he does have a seizure disorder, but that does not rule his life. I've never read a book with a character who has epilepsy before and I'll admit I was intrigued. I don't know much about it, and learning new things from the books I read is always fun.

Brandom is older, divorced, and closeted. He doesn't know what to expect from his new, younger roommate, but a cute guy is not it. He has a bit of Daddy vibes, in that he wants to feed Christian and make sure he's okay, but he's not a Daddy at all. He's just super sweet and kind and it's hard not to love him.

I'll be honest, I don't normally like the whole secret relationship trope. It feels too much like a lie to me and it's never sat right in my mind. But I can't tell EM Denning no because her books are always so good. Whether they're kinky or sweet and romantic, there's just something about her writing that I can't stay away from. And unlike other books in this trope, Brandon and Christian decide to keep their relationship a secret because they want it to just be theirs for a while. I can support that.

Christian knows what he wants, which is Brandon, and he isn't afraid to take the chance when it presents itself. Of course, he has his doubts about Brandon hurting him, and his epilepsy getting in the way, but he doesn't let that hold him back. Which was one of the reasons why he moved out in the first place. Watching him come into himself is so much fun.

I think what really made this book for me is the support they give one another. They agree to keep their relationship a secret for their own reasons, but when it really comes down to it they're there for each other. Even when there's some drama, their feelings for one another are never questioned and they're pretty much perfect in their sweetness.

I know this was just supposed to be a duet for Nathan and Christian, but Christian has a best friend and Brandon has a son and I really want them to have their own stories. It's so hard not to find side characters intriguing, especially when they're written by an amazing author.

"He didn't expect Brandon to touch him like he mattered. To caress his skin and taste his flesh like he was worth taking any time with."

"There'd been a thousand kisses in his life, but Brandon could only remember a handful of them. Yet each time Christian's lips touched his, the experience got burned into his memory. There was something intoxicating about being with Christian."

"Your hero is probably subtle, someone unexpected. A solid pace for you to land when you need one, but who will otherwise leave you to your own devices. He'd be there all the time, but you'd feel it most when you needed him and he was just there and you didn't have to ask."