Series: Out of Uniform, #7 *Final book in the series*

No content warnings needed. Hot fake relationship shenanigans dominate along with being trapped outdoors, but HEA for everything. No addictions/bdsm/deaths etc. 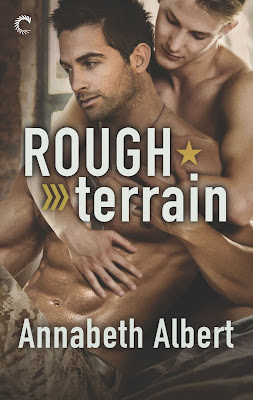 The camping trip from hell may be the first stop on the road to happily-ever-after in Rough Terrain, the final book in Annabeth Albert’s critically acclaimed, fan-favorite Out of Uniform series.

Navy SEAL Renzo Bianchi has a soft spot for Canaan Finley, and not only because the man makes a mean smoothie. He’s the first guy to get Renzo’s motor revving in a long time. But when he agrees to Canaan’s insane charade—one all-access fake boyfriend, coming right up—he never expects more than a fling.

Creating a hot Italian SEAL boyfriend to save face seemed like a good idea…until his friends called Canaan’s bluff. Now he’s setting off into the woods with the very man who inspired his deception, and Canaan is not the outdoorsy type. The sparks are already flying when a flash flood separates them from their group, leaving Renzo and Canaan very much trapped…very much alone in the wilderness.

Working together to come up with a plan for survival is sexier than either of them expects. But back in the real world, being a couple is bringing its own set of hazards… 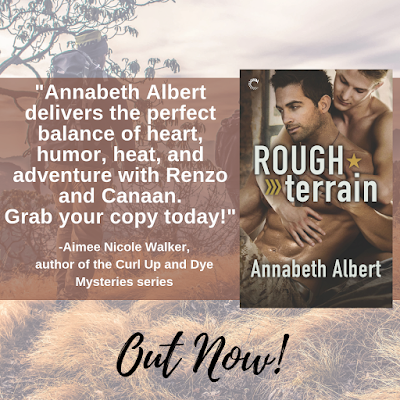 And as he watched him sleep, it hit Canaan that while he was on this weird adrenaline high, Renzo did this every day. Every day for days on end he confronted danger, high risks, threat of death, and he had a whole team of people counting on him the entire time too. While Canaan had been busy freaking out, he’d worried a lot about himself, about Grandpa, about what he’d miss out on. And he’d worried some about what he and Renzo could have had, especially when Renzo had been threatening to go out on his own.

But Renzo had neither freaked out nor focused on himself—the whole time, he’d been worried about Canaan. Keeping him warm. Making the alarms to drink and eat. Making sure Canaan had first choice of food. Coming up with plans to keep them safe and ensure the rescuers spotted them. Damn. It was humbling to think of all Renzo had done for him. And now Renzo was exhausted. Spent. Energy reserves clearly gone.

And yet, he would do something like this again, soon probably. With better equipment and better teammates, but he’d face danger again, head on. Because that was what he did. Who he was. His moral fabric was made of camo—tough as ripstop, unwavering and unyielding. Maybe Renzo had joined up because of his brother originally, but he hadn’t been lying about finding himself on the teams. And who he’d found there was possibly the best man Canaan had ever met. His throat ached just looking at Renzo, hands tightly clenching to stop from touching him.

Renzo, of course, slumbered on, but something inside Canaan shifted. Changed. Accepted this new reality in front of him where this sleeping giant was suddenly the most important person in Canaan’s life.

Annabeth Albert grew up sneaking romance novels under the bed covers. Now, she devours all subgenres of romance out in the open—no flashlights required! When she’s not adding to her keeper shelf, she’s a multi-published Pacific Northwest romance writer. Emotionally complex, sexy, and funny stories are her favorites both to read and to write. Her critically acclaimed and fan-favorite LGBTQ romance series include the #OutOfUniform, #Gaymers, #PortlandHeat, #RainbowCove and #PerfectHarmony series.

To find out what she’s working on next and other fun extras, check out her website: annabethalbert.com or connect with Annabeth on Twitter, Facebook, Instagram, and Spotify! Also, be sure to sign up for her newsletter for free ficlets, bonus reads, and contests. The fan group, Annabeth’s Angels, on Facebook is also a great place for bonus content and exclusive contests.

1) Paperback copy of any back catalog Out of Uniform series book. Open Internationally.

2) e-copies of any back catalog Out of Uniform series book. Open Internationally.