Book Talk Review; More Than Anything

Emo strikes again with a triad! 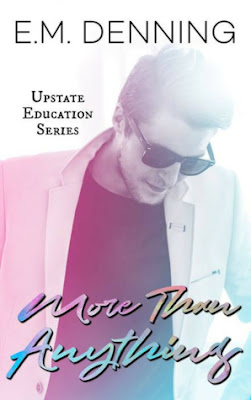 Joe Carpenter's parents have pressured him his entire life. He's always needed to do more and do better, but as hard as he tries, he can't seem to keep his head above water. When a friend makes an offhand comment about finding a Daddy, Joe initially scoffs at the idea--until he doesn't. Through mutual friends, he meets not one, but two gorgeous men who are looking for somebody just like Joe.

Charles Thurston knew when he called Eugene for a favor, the younger man would come running back into his life. Thurston loves Eugene and wants more than anything to repair the damage to their relationship, but no matter how much time has passed between then, Eugene still isn't everything that Thurston needs.

Eugene lost Thurston once and he isn't going to do it again. The pressure to be everything Thurston needs is more than he can handle. Unwilling to accept Thurston's level of attention and discipline, Eugene comes up with a simple solution--find a third.

Joe is the kind of man who can give Thurston what he needs and Thurston used to be the only man Eugene wanted. But once they're together, the three of them discover a shared life is a life they want more than anything.

E.M. Denning has done it again. She's written a book that hits all the right places for me.

We see all three characters appear in book one, Half As Much. I'll be honest here I was not into Joe having a book. He just didn't stand out to me as a character like Eugene and Thurston did. But he so stands out now. Very much so in fact.

These three have very different personalities and probably shouldn't work. That's the talent of E.M. Denning. She has a knack for putting characters together and not only making them fall in love but making them feel special. Feel alive, comfortable, at home. That is so important, something everyone wants, something we all deserve. Not only does she do that she does it in a way that feels natural.

I don't feel like I'm reading the same stories of insta-lust and insta-love. Emo writes sex and emotion and she writes them well, but they don't feel fake. Yes, her characters sometimes fall into bed early, but they have reason to. They have layers and sex is one of those layers. But what I probably wouldn't like in another book I love in hers. Why? Because they have reason. They have purpose. Whether the characters know it or not they're halfway to being each other's everything. And that is what makes me fall in love with the books and the characters. Because I can see, thanks to the pretty words on the page, how they feel.

My heart broke for Joe. He wasn't in a good place. He was struggling in all the ways and I just wanted to cuddle him and make sure he was okay. I can't say better because there's no "better" for some of the things that Joe faced. But there is good. There is safety, there is self-care. All of those things Joe needed, he just couldn't reach them. Not without help. Enter Eugene and Thurston.

Thurston and Eugene have a history. They tried once in the past but couldn't give each other what they needed. That doesn't mean the feelings went away, doesn't mean they wanted each other any less, they just needed a new way to approach the relationship, even if they didn't know it at the time. When Eugene and Thurston fall back into one another's lives they agree to try something new. To bring in someone else. Such a major decision should scare them, but the only thing they're afraid of is losing each other again.

Daddy Thurston is...different than I expected. He's both as intense as I thought him to be based on what we see in Half As Much, but not. I know he has a softer side, based on things said in More Than Anything, and the whole premise of the book. But the way he is with Joe and with Eugene is endearing. I loved how patient and kind he was with Joe, but also how exacting, demanding, and impatient he could be. He loved both his boys and everything he did showed that.

Eugene is probably my favorite of the triad. He had the looks, the money, and the name to get anything he wanted. Yet he didn't use those things unless he had to. And never for himself, but for the men in his life. He's a brat, but there's also a maturity there that he hides well. It comes out more and more the longer Joe is with them, but he'll never stop being a brat. He's my favorite because he's the one who doesn't seem to fit in the relationship. You wouldn't think he'd be okay to be in a triad, let alone have a Daddy. But he needs it. He needs the stable life Thurston provides. He needs someone to care for--even if he didn't know he needed that before Joe.

Together these three men come together and tell a very well written, well-rounded love story. E.M. Denning wrote a book that I got lost in. Her words always seem to flow off the page and I usually forget I'm reading because I become so invested in these characters. That happened here. I didn't realize I was nearing the ending until I was teary at what happened. No spoilers, but let's just say it was the perfect ending to the story of the Daddy, the boy, and the brat.

"I won't ever give either of you up."

"The shared term of endearment made him smile...Eugene decided he didn't mind Thurston calling them both darling. They both belonged to him now."

"He needed this. Needed them. Needed people who cared about him and adored him. People who wanted to touch him and give him warmth and affection, and themselves."