Jack and Ethan are everything 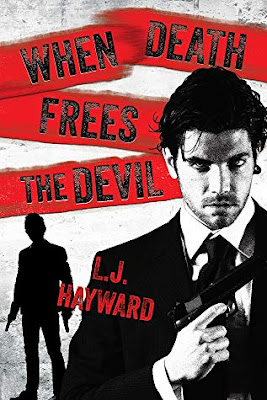 Ethan is finally free. He’s left the Cabal behind and embraced a civilian life with Jack, the man he loves. The only problem is that the Cabal isn’t willing to let him go. A call in the middle of the night and a threat to Jack’s family, and Ethan is back in the game. The only way out is to take on the organization that spent years warping his life.

Jack’s boyfriend has a way of vanishing on him, but this time Ethan’s disappearance is more frightening than ever. A trail of mysterious clues, a hit against his family, and the handprint of the Cabal on everything means the greatest test of love and determination Jack has ever endured.

Torn apart by forces greater than they are, Jack and Ethan must fight harrowing battles to get back to each other. The Cabal is the greatest foe either of them has had to face. Ethan is willing to throw away everything to bring an end to the Cabal’s evil. And Jack is willing to do the same to make sure Ethan comes out the other side alive.

Oh this book. What can I say about this book? I loved everything about it even when it hurt my heart.

Jack and Ethan are together and with Ethan finally free from the Cabal they can live together the way they want to. Only the Cabal doesn't let its assets go that easily.

My heart was in my throat from page one and I had seriously considered chucking my kindle across the room or two or at least putting it in the freezer for a time out.

There's the same back and forth that we've seen with the first two books in this one, only it's a bit different. This means we only get a few pieces of the puzzle at a time and when things are revealed and nothing is like it seems your heart goes a little crazy. We get both Jack and Ethan's POV. And while Ethan's POV makes me all giddy on the inside it also hurts because he goes through a lot. While both Jack and Ethan change and grow over the course of this series, Ethan goes through the most changes. Jack comes to understand that the world is all sorts of grey and sometimes you can feel sympathy for the bad guy. While Ethan turns his whole life around. Not for Jack necessarily, but he does play a big part of it.

One of the reasons that I love this series so much is that I cannot figure out the mystery. Suspense books are usually very easy for me to puzzle out so the fact that I went into each book and didn't know until it was actually revealed to us was brilliant. LJ Hayward is a master storyteller.

There's so much betrayal, perceived betrayal, WTF moments, and sweet OMG moments between Jack and Ethan that for a long time afterward, I didn't know which way was up. If you were to look at my Twitter feed while I was reading this book you would have saw me curing out the author and her basically laughing at my pain. It took me a long time to figure out how to write this review. Because there's so much I want to say. Most of it is to fangirl over how amazing I think this book is. And some of it is how insanely brilliant I think LJ Hayward is. And the rest of it is that I still have no idea what to say. Because I can't spoil it for y'all. I can just say that if you've read the whole series up to this point then you know better than to go into it with any expectations. This book blows it all away.

While this is the final book in this series I truly hope it's not the end of Jack and Ethan. There's so much more they can do and I want to see one thing, in particular, come to fruition. This book is so much more than the fact that Jack saves Ethan from his past finally. But they save each other from life. This whole series has been building to this, to Jack and Ethan finally being able to love each other with nothing between them.

This series was an epic love story wrapped up in guns, explosions, and fast cars.

"It had taken a lot of time and some tough lessons, but One-three ad finally made himself into a man he could live with, and Jack had named him in a moment of love and connection. He'd taken the word "Ethan" and made it into a name, something that defined him as a human and lover."

"I haven't forgotten anything I learned back then. But I have learned other things since, and one of them is that I'm not the monster you wanted me to be, that I am capable of my own person and making my own decisions. The right decisions. I also learned that I am worthy of being loved, and capable of loving in return."

"He wasn't Ethan Blade, or One-three. Not even Paul St. Claire anymore. He was Ethan, the man Jack had shown him he could be. Damaged and grey, but worthy of something better, of being someone better. Someone who didn't let the monsters from his past construct false walls fro him anymore."

"His chest grenade went off, blazing through him for the first time in what felt like forever. It was lust for this beautiful, sexy man, yes, but it was so much more than that. Jack might have had his head up his arse for far too long, but he knew what that sensation meant now. It was a sign of so many things, but right now, it simply meant he had to take care of Ethan, even if he had to tie him to a chair to do it."
Book Talk Reviews