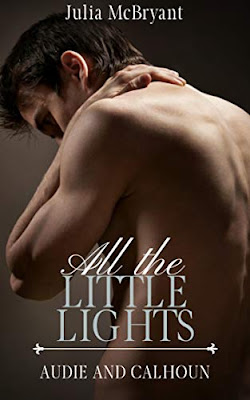 Audie’s finally escaped the hell of his parents’ homophobic home in Charleston to build a real, lasting romance with Calhoun in Savannah. But Charleston suddenly shows up on his doorstep when the couple is forced into playing parents to Audie’s gay cousin, beaten bloody and disowned for his sexuality.

Audie has to confront his demons head-on — with a misbehaving, committed hedonist of a cousin in tow. Calhoun’s tired of acting like the mean dad. Audie’s breaking into pieces. For the sake of Audie’s cousin, their relationship — and some very unwelcome news from Audie’s father — they have to untangle this miserable knot. Somehow.

This book broke my heart in so many ways. Audie and Calhoun were my first Julia McBryant characters. When I read their story the first time I fell in love with them, especially Audie. I just want to hold him and make sure that nothing ever hurts him again. He's my little angsty baby and I can and will reread his story over and over again.

All The Little Lights shows the relationship between Audie and Calhoun three years after they meet. They've grown together as people and as a couple and now they're going to live together in Savannah. A lot of changes are happening, they're not only living together, but they're living out together. It's scary and stressful, but they have their friends and Calhoun's family to support them.

They were happy and content and building a life together but of course, Julia McBryant had to shake things up and with that comes Audie's abused cousin and all the ghosts of Audie's past.

I will be honest I broke down a few times like sat in my bathtub and sobbed broke down. Audie was doing so good, he wasn't perfect, but he was in a place where he could have his relationship with Calhoun with his cruel childhood only making vague impressions upon his new life. With Monroe needing them, however, everything that Audie has been running from shows up on his doorstep and he doesn't deal well.

This book is pretty words wrapped around heartbreak. Audie and Calhoun struggle to find their footing. As Audie retreats into himself and Calhoun plays the bad guy as he tries to teach Monroe how to be a functioning person while trying to save Audie from himself. Their relationship is strong, they've been through a lot together, but a past like Audie's is hard to let go of, and neither one of them is equipped to deal with it.

One of the things I love most about these two is that even though things get hard and they fight and hurt each other, their love and relationship is something they fight for. Even as their words cut and they hurt one another, they still fought for what they had. Audie's demons didn't go away overnight, but his relationship with Calhoun was grounding for him. And the need to keep his cousin safe from his family helped.

Audie is stronger than he was when we first met him, but he still has a long way to go before he can truly put his past behind him. He has Calhoun, sweet, innocent Calhoun who loves Audie with all that he is. It may be a little unhealthy for Audie to have his healing based on Calhoun and his love for him, but that's not all that he has. He has friends, Calhoun's group is now Audie's and that helps. He has family, as Calhoun's gran basically adopts Audie after meeting him. While Audie begins his healing process after loving Calhoun, he continues to heal himself for him.

We knew that Audie's family was toxic. We learned in Something Wild and Perfect that his father was an asshole who hurt Audie his whole life. This book shows that his uncle is the same, worse even. In order to protect Monroe from his family Audie and Calhoun pull out all the stops and Audie stands up to his father. I cried for Audie during that scene. I was so proud of him. Facing his parents goes a long way in his healing process. Though it hurt to learn more about what his father did to him, it was worth it because it helped heal him.

Even though this book is about Audie facing his past and how that transfers into building a life with Calhoun it's not all angst and tears. They have their friends in Savannah who help keep things light and fun when they need it. I loved seeing the rest of the cast in this book, even when some of them (Henry) were having their own problems, they were there for their friends. This world that Julia McBryant is so intricate and close-knit, even when they have their own things going on.

All The Little Lights broke my heart, but the HEA that Audie and Calhoun get after everything and it is perfect.

"Nothing and no one can touch him in this house. He is finally, really, and truly safe."

"There's something primal and soothing in breathing together, in sharing that same rise and fall, rise and fall. Like an ocean, a heartbeat...this is where they belong."