Release; Take Me Back

Title: Take Me Back 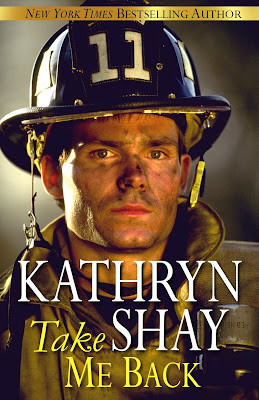 Six years ago, Kate Cassidy broke Rafe Casella’s heart by abandoning him a few months before their wedding. Now she’s in town with the gut-wrenching news that she had his baby, in secret, and she wants Rafe back. She has to be kidding!

But Kate is deadly serious. She made the worst mistake of her life when she left Hidden Cove and she’s determined to fix it. She plans to reinstate herself in the fire department and raise her son in a loving family—one that includes his father.

A rollercoaster of emotion, devastating fires, a stalker targeting Kate and a sizzling attraction that never diminished, set the two of them on an irrevocable course to reunion. That is if they can all stay alive.

Don’t miss books 1-8 in the beloved Hidden Cove Firefighter series: AFTER THE FIRE, ON THE LINE, NOTHING MORE TO LOSE, AMERICA’S BRAVEST, IT HAD TO BE YOU, CHASING THE FIRE, THE FIRE INSIDE and A BURNING PASSION.

A NEW YORK TIMES and USA TODAY bestselling author, Kathryn Shay has been a lifelong writer and teacher. She has written dozens of self-published original romance titles, print books with the Berkley Publishing Group and Harlequin Enterprises and mainstream women’s fiction with Bold Strokes Books. She has won many awards for her work: five RT Book Reviews awards, the Bookseller’s Best Award, Foreword Magazine’s Book of the Year and several “Starred Reviews.” One of her firefighter books hit #20 on the NEW YORK TIMES list. Her novels have been serialized in COSMOPOLITAN magazine and featured in USA TODAY, THE WALL STREET JOURNAL and PEOPLE magazine. There are over ten million copies of her books in print and downloaded online. Reviewers have called her work “emotional and heart-wrenching.”