Book Talk Review; For I Have Sinned 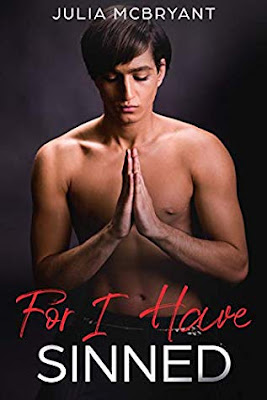 Father Robinson Arthur hasn’t believed anything in years. He’s going through the mindless pray-work-teach routine, faithful to his vows, when 18-year-old Bastian McCarthy swaggers onto his swim team. God help him, Father Rob develops a crippling crush for the bisexual brat, who torments him during Confession, makes the nuns cry, and sleeps with half the girls. But Bastian finally proclaims that not only does he have a daddy kink, he wants a daddy — and that daddy’s Rob. Rob doesn’t know Bastian’s smartass exterior hides a life-destroying secret, a secret that’s eating Bastian from the inside out. Both Bastian and Father Rob desperately need healing. If they’re lucky, the star swimmer and the runaway priest just might find it in each other.

Full of twists, turns, and tons of steam, For I Have Sinned brings the daddy kink with a side of hurt/comfort and plenty of angst. It contains the novella Bless Me, Father.

Holy Daddy kink goodness. Julia McBryant is an author I discovered last year and y'all she is amazing. Her words are beautiful, her prose is some of the best I've ever seen, and her boys are so beautifully broken I just want to wrap them all up and love them forever.

For I Have Sinned is the first book in a series that features Daddy Rob and his bratty boy, Bastian. However, it is set in the same world as her other books, so if the name Bastian McCarthy sounds familiar, that's because it is. You don't have to read any of the other books to read this one though. We see Bastian on page briefly in Neon Saturday Night, but we don't really know him. This novel takes place before that novella, and I have it on good authority that it was written before the other books in this world were.

Bastian and Rob aren't only Daddy and boy, but student/teacher as well. They begin their relationship before Bastian is out of high school and that is not a spoiler as the author will tell you that herself. He is over eighteen though so don't worry there. Student/teacher trope is one of my favorites and pairing it with Daddy kink was brilliant on the author's part as that is what Bastian desperately needs. These two are so perfect for each other that when Rob finally gives in to the temptation it's like finally.

Rob is a priest who no longer believes in what he's preaching. He won't admit it, but he's lonely, trying to be something he's not has worn him down over the years. Though he's worked hard on not being one of those gay priests, all of his hard work goes out the window when he meets Bastian. Bastian who is bratty, submissive, needy, and so in need of someone to love him that it almost breaks Rob. When he gives in and tries to be the Daddy that Bastian needs, it's everything. I've read a lot of Daddy kink and Daddy Rob is the best ever.

Bastian. If you've read any of Julia McBryant's other books then you know the name Bastian McCarthy. And like the other characters you think you know who he is. But with the exception of Audie Currell and Isabel Sims, no one really does. He's the guy who got kicked out of St. Albert's for getting caught sleeping with his teacher, he's the guy who worked his way through most of his peers, including some of our favorites. He likes to fuck, play games, and get into as much trouble as possible. Or does he? This book shows that Bastian McCarthy is not who he pretends to be. Underneath it all, Bastian is a lonely boy who just wants someone to see through all his walls and love him.

When Bastian lets Rob see the real him it's both a beautiful and devastating thing. There's a part in the book, shortly before they get together when they're still flirting the edge, and they're discussing what having a Daddy means to the both of them. Bastian says, "They didn't really care, because hey, it's Bastian McCarthy, he does what he wants...They didn't care. It was like this huge joke, like, 'Oh, Bastian.' Just another game." That broke my heart. Because he talks about wanting someone who cares and then goes on to say that no one cared when he fucked around because it was expected of him. And I just wanted to wrap him up and make sure that he knew he was loved. We don't know him well at this point in the book, he's barely starting to open up and be vulnerable, but the glimpses we get are utterly heartbreaking.

By the time all of Bastian's secrets came out I was completely in love with him and I sobbed for him. Nothing "has been easy for him and the deep loneliness broke something in me. I spent a good portion of the book in tears because all I wanted to do was wrap him up and take care of him, luckily he had Rob. Even when he tried to push him away, even when he was scared of showing Rob how much he hurt, Rob was there. They both might be new to the type of relationship they were entering--Rob never having been a Daddy and Bastian never having a real Daddy--but they found their way.

For I Have Sinned is a beautifully written book about loneliness. It's characters come to life with the magical prose that only Julia McBryant can write. I need more Bastian in my life because though he came a long way in this book, there's still so much left to unpack with him, my heart is going to hurt, but I need to see this boy as happy and as loved as he can possibly be. Rob has already proven that he's the best person for that job, so I cannot wait to see where their relationship goes.

"I needed you, little one, to drag me out when I was too stupid to drag myself out. So yes, I love you. Christ Bastian. Of course I love you. I didn't think I needed to say it."